Two of America’s finest cities are rewarded with a post today at Eatosi. One, known as the city that never sleeps, the other, the Windy city. New York is pitted against Chicago, again… this time Pizza is on the menu. 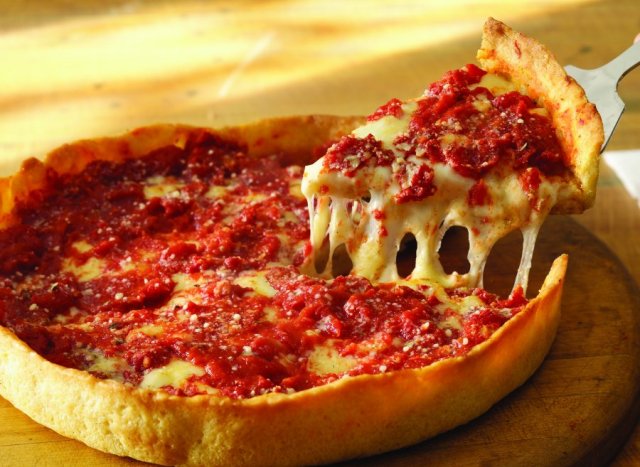 2003, The Oscars. Gangs of New York was pitted against Chicago for the “best picture” category. Scorsese, an Oscar stalwart was surely the critics choice in two very contrasting films, hell, he even cast Leonardo Di Caprio against a mustached, and very angry Daniel Day Lewis. Surely there could only be one winner… Chicago.

Few nations have a city rivalry like it, Chicago Vs New York is as old as the nation itself.  From lists which include “in Chicago you can enter a restaurant and not have to re-mortgage your home” to “New York is a better walking town” you’d be hard pressed not to find some animosity between the rival cities.

Such was the case when in November 2013, New York comedian and satirist, John Stewart decided to enter a war of words with… Chicago.

“I may have mentioned something about Chicago style pizza… erm, and how it tended to be less pizza-ish than, pizza.” John Stewart continued “In articulating that sentiment I may have implied that Deep Dish pizza tastes like cheese string that had been baked inside Mike Ditkas a*@.”

This of course didn’t go unnoticed. John Stewart in all of his wise televisual wisdom knew that the repercussions of such a statement would cause a stir, it seems that the only logical, proportional response was for every Chicago based journalist and reporter to openly taunt and somewhat abuse the New Jersey comedian.

“This is a picture of Chicago mayor, Rahm Emmanuel sending John Stewart a pizza” cackled one presenter, swiftly proceeded with “and here is a vine video posted by John Stewart showing that not even his dog will eat a slice”. According to Stewart, that particular dog “has eaten food from a garbage can and, spent all day sniffing another dog’s a*@”.

Stewart was to be inevitably confronted by a Chicago pizza owner, later admitting “that (the Chicago style pizza) didn’t taste so bad.”

Their histories couldn’t be any more different.

The New York branch of pizza was created by Neapolitan immigrant, Gennaro Lombardi. Using his grocery import store, Lombardi’s, Gennaro established America’s first pizzeria in 1905. Based on the Neapolitan variety of pizza making, the dish was naturally popular with other Italian immigrants. However, it wasn’t all rosy for Gennaro, the cost for a whole pizza was considered too high at five cents, and so, to avoid not selling anything, Gennaro decided to sell slices based on the corresponding value to what his customers had available at the time.

Chicago’s roots however lie with American-Italian, Rudy Malnati. Invented at Pizzeria Uno the thick crusted, deep dish “uses a thick layer of dough (made with olive oil and cornmeal) that is formed to a deep round pan and pulled up the sides. The pizza crust is then parbaked before the toppings are added to give it greater spring.”

“The raw dough is baked as if normal, but halted at about 80% of the normal cooking time, when it is rapidly cooled and frozen. The partial cooking kills the yeast in the bread mixture, and sets the internal structure of the proteins and starches (the spongy texture of the bread), so that it is now essentially cooked inside, but not so far as to have generated “crust” or other externally desirable qualities that are difficult to preserve once fully cooked.”

These contrasting styles, you’d think, would inevitably mean that further debate on the two cities rivalries would be curtailed somewhat. Think again. A basic Google search for “whose pizza is best? Chicago or New York” returns with over 70 million answers.

If John Stewart hadn’t exacerbated the subject enough though, only a few months prior to Stewart’s jovial tirade, CBS published TripAdvisor’s results on where to get the best pizza in the US. The results, would surprise you.

The best place to get a pizza in the US, according to TripAdvisor is… San Diego.

“Better known for burritos and beaches than marinara and mozzarella, travellers now have yet another reason to visit sunny San Diego,” said TripAdvisor’s Brooke Ferencisk. Based on John Stewart’s experience, I’m sure the people of Chicago and New York would have something to say about that.

8 thoughts on “Things don’t get deeper than this… America’s great debate.”