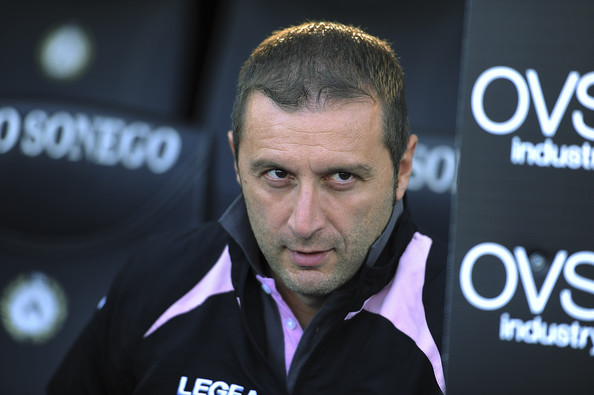 The press room was, as ever, packed. The games before Christmas bring out the best and worst in both the press and their unknowing victims. “I know that you are all worried about my health, both physically and mentally, and also for my diet, that I don’t have enough sugars in my blood in this period”. Raising a panettone from below his desk he would continue, “so I brought this panettone to show you that I am both physically and mentally well, serene, and that my diet is just fine”.

Nervous laughter tickled the room more than a Larry David comedy sketch. Tempting fate, both from a football and cultural angle is rarely done in Italy, never at the same time. Devis Mangia could trade puns with the best for his surname (Mangia, from the verb Mangiare > to eat) but the wrath of his boss is rarely usurped by wax-lyricism; just two days after this press conference, Devis Mangia was no longer Palermo coach.

A calcio tragedy befit of the situation, it seems that tempting fate with Italy’s Christmas pudding is one step too far, even for sport. “Non sei arrivato a mangiare il panettone” (you didn’t even make it to eat a panettone) is traditionally for young lovers deciding to go “on a break” but in recent years, it has been applied to the fall of governments, the disappearing pay check, and even diet failures. ‘Not making it to eat your panettone’ is perhaps best seen as abject failure, all before the end of year.

“The classic panettone weighs about a kilo (that is, 2.2 lbs) and is about 8 inches high. The special dough, similar to sourdough, slowly ferments and rises for at least 12 hours, but the leavening process can last much longer. Panettone ingredients are usually flour, eggs, butter, yeast, dried raisins, candied oranges, citron and lemon zest. Throughout Italy, bakeries still prepare it daily during the Christmas season for their clients.”

It’s Milanese origins have bred folklore, dating as far back as the twelfth century. It’s first written acknowledgement comes in the fifteenth century when the duke of Milan, Ludovico Sforza (Ludovico il Moro) and his wife Beatrice played cupid for a young aristocrats son, called Ughetto. In an act of unbridled attention seeking, Ughetto, who was ‘madly in love with a patisiere’s beautiful daughter Aldagisa decided to become baker for a day and create a rich, sweet bread in honour of her.’ Apparently, with the help of Leonardo Da Vinci and other noblemen, Ludovico and his wife managed to convince Ughetto’s father to allow his son to date the young lady of non noble blood.

The other, well recognised history of panettone is once again born in the chambers of Ludovico. At the behest of the Count, the staff were asked to prepare a special dessert. The chef who rose to the challenge, did however get slightly carried away. During baking, this sweet bread containing grapes burned, throwing the cook in despair. Between curses and screams, rose the voice of a kitchen boy, whose name was Toni. He advised the chef to serve the same dish, justifying it as a speciality with the crust. When the unusual recipe was presented to the guests, it was greeted with thunderous applause, and after tasting a chorus of praise rose from the whole table, “Pan del Toni” (Toni’s bread) was born.

Of course, panettone is more commonly known in the UK as the bread that Morrissons “make in store, everyday” or the thing that a certain celebrity chef reckons is the same as pandoro; it isn’t. Whilst sales were strong last year for the dessert, in Italy an estimated 120 million will be sold and shared around Italian households, nearly twenty times the amount the UK will sell in the festive period.

With the rise of popular baking shows, many think they can make their own panettone, they can, it’s just a little hard work. Whilst this isn’t the most traditional recipe, Paul Hollywood gives you the essentials to making your own with this guide. (Please note, he even says, “it sits between panettone and brioche”, which is ironically what a pandoro is!) Whilst, if you have been given panettone as a gift and don’t know what to do with stale left overs, this recipe from Skye Gyngell will appease the more british dessert traditionalists; or annoy any potential BNP supporters in the family.