Today’s Eatosi is based in the twin city of, Manchester, and where the author can be found energetically doing his paid day job! Did you know that Barcelona prides itself on having an area measuring nearly 260 football fields for pedestrians; that must be why Messi is so good, right? 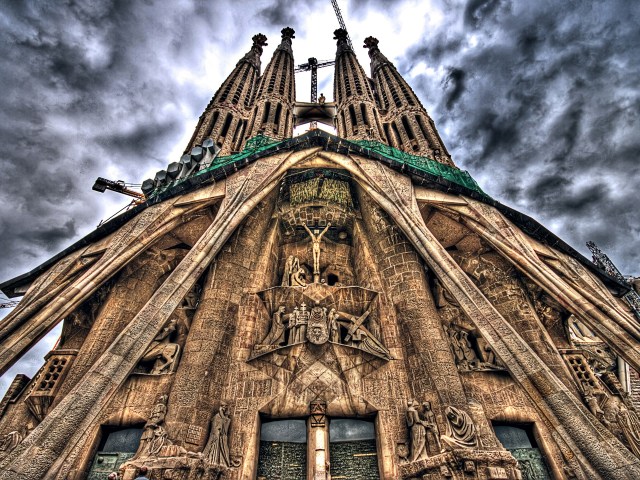 Like many before, and many more since, Antoni Gaudi had been rejected by a woman. It was the days before Match.com when rejection could be done by not answering a polite email; it was the days where masterclasses in the art of the “pick-up” weren’t even a fore thought; rejection it seems, was and still is, a tough pill to swallow.

Already known to the Barcelona elite, Gaudi’s professional career was well acknowledged before he was called to begin work at the Sagrada Famiglia. Wealthy, flamboyant and courted by high society you’d think he had it all; alas he was missing love.

Rejection hit the architect rather hard. Dedicating the next thirty years of his life, he would project manage one of the greatest religious and arguably architectural structures in modern history. Where traditional churches hid statues and wealth on the inside, keeping the outside world hidden to the congregation, Gaudi’s objective was simple, turn the concept inside out. Adorned with statues and “heavenly” arches on the outside, the inside is meant to look like a forest, bringing you to one with nature.

Gaudi would also profoundly change. He gave up meat, alcohol, spent most of his wealth, stopped associating with high society and, discovered god. His devout faith meant that each morning he would attend mass and daily prayer; something which would later contribute to Gaudi’s untimely passing.

“On 7 June 1926, Gaudí was taking his daily walk to the Sant Felip Neri church for his habitual prayer and confession. While walking along the Gran Via de les Corts Catalanes between Girona and Bailén streets, he was struck by a passing tram and lost consciousness.[49] Assumed to be a beggar because of his lack of identity documents and shabby clothing, the unconscious Gaudí did not receive immediate aid. Eventually a police officer transported him in a taxi to the Santa Creu Hospital, where he received rudimentary care.[50] By the time that the chaplain of the Sagrada Família, Mosén Gil Parés, recognised him on the following day, Gaudí’s condition had deteriorated too severely to benefit from additional treatment. Gaudí died on 10 June 1926 at the age of 73 and was buried two days later.”

If Gaudi, like most men had taken rejection slightly better we may not have la Sagrada Famiglia. The solution to all of his problems could have lied with a visit to one of the many, many tapas bars.

With over three thousand tapas bars, Barcelona is the capital of the small snack and drink. Situated on the mediterranean sea and surrounded by mountains, the tapas naturally lends itself to seafood and rich meats to go alongside the strong tempranillo wine and bold beers.

The tapas was born when due to an illness, the Spanish king Alfonso the 10th, had to take small bites of food with some wine between meals. Once recovered from the disease, the wise king decreed that no wine was to be served in any of the inns in the land of Castile , unless accompanied by something to eat. This was a wise precaution to counteract the adverse effects of alcohol on those people who, through lack of money to buy a nourishing meal drank alcohol on an empty stomach.

Of course now, Tapas has not only stayed firmly put in the Spanish shores but tea parties and picnics across the continent are embracing the idea of “hosted tapas events”. Dale Berning writing in the Guardian visited one such party where over twenty attendees each made a dish to bring and share, all in the authentic style of tapas dishes.

Think of tapas like party food without the pomp; small and shareable without the waistband stretching; full of flavour without the hassle. BBC good food has a great starters guide to tapas, each which should be tried at home at least once and UKTV food has a list of fantastic tapas foods to try and recreate at home.