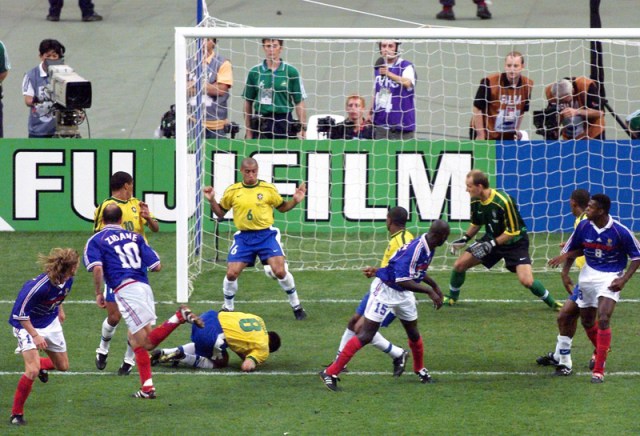 French football was in the doldrums. Not since Michel Platini graced the field, had anyone come into the team that could be a match day winner. Of course, Eric Cantona was probably equal to the man as a footballer, more erudite as a poet for sure; but Cantona’s constant falling out with the football federation meant his career would be tarnished on the international scene.

It was all culminating into an epic furore. France had failed to qualify for Italia ’90 and USA ’94, a nation’s footballing morale was being ebbed away, slowly. Boules and street mimes were more entertaining, possibly… definitely. The French Federation replaced then manager, Gerard Houllier with Aime Jacquet, a stallwart defensive midfielder of his time and experienced coach to try and take control of the situation. Out went Cantona and Ginola, in came Zidane and company.

The road to French glory of ’98 would all begin with an ill fated pre-tournament, tournament, Le Tournoi. The hazy days of the summer before a World Cup were traditionally left for rest, but the French decided to play it different. Jacquet wanted to put to test his new generation of French players, willing to battle for national pride and restore faith in the footballing system. Competing against Brazil, England and Italy, the objective was simple, “let’s not mess this up”. They were left fighting for the wooden spoon, Italy only succeeding in not making things a squalid disaster. England finally winning something since 1966…

But Jacquet’s plan was in full swing; his players, his footballing philosophy was taking shape. Zinedine Zidane had already been strutting his magic at Juventus, Desailly had been a power house in Milan and Youri Djorkaeff was weaving through defenses for Internazionale. Lilian Thuran, Christian Karembeu and a young Patrick Viera all playing in the Italian league were called for national duty as well.

And yet, there was something about this team though that felt very, non-French. Zidane, Desailly, Djorkaeff, Karembu, Thuran and Viera were all “colonial” French; their inclusion in the squad still raises questions to this day. The French Press obviously found fault with the logic of playing these very players, whilst football pundits would make less than advised comments about nationality in live TV feeds. France was changing, a multi-ethnic nation finding its national identity, football the kaleidoscope which people would turn to find answers.

This French team had the talent, and under Jacquet, the belief that they could go all the way; fortune had to favour the brave at some point. As pre-tournament non-favourites the home nation had nothing to lose, their style of play showed it; attack at every opportunity, defend the Alamo when the moment arrives, it wasn’t unorthodox but it worked. Beating Brazil in a 3 – 0 finale showed that France had reached the top of footballing greatness, as Jacquet would announce at the time, “There was that great feeling of a shared moment spreading through the public and not just among football fans – the whole of France took to the streets.”

The French/non French conundrum however is not just reserved for footballing geniality. For years, Crème Brûlée has assumed the role of French decadent dessert, but its origins lie closer to England, a slap in the face for the gastronomic pomp of France.

James Beard from the Los Angeles Times would write in 1970 “One of the greatest desserts in the realm of cooking is Creme Brulee and despite its name it is not French but a very old English one. No one seems quite to know when or how it became Gallicized, for over a long period of time it was known simply as burnt cream. The earliest recipe I have been able to find was printed in a 17th-century cookbook from Dorsetshire. After that it had a rather interesting history and gained considerable renown.”

If you enjoy an overly indulgent and ridiculously sweet version, then the queen of sugar, Nigella Lawson may just be your calling card with this take on the classic recipe. If however this already decadent delight requires another shot of something different then allrecipes has a bailey’s inspired dish which must be tried.