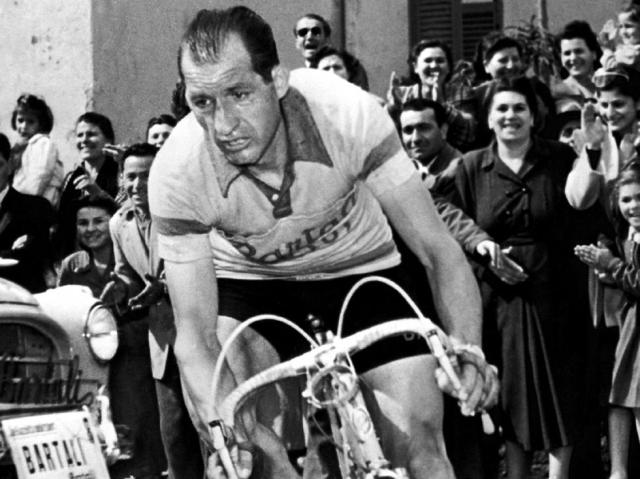 Palmiro Togliatti had been shot.

Italy’s leading Communist leader in the post war was a crucial figure of the day to day running of a nation. Whilst parliament was heavily controlled by the Christian democrats, the working class, the ones responsible for the re-birth of Italy were anything but.

The country was economically desolate and socially fragmented. The constitution which was enacted at the start of 1948 quoted “Italy is a nation built on hard work” as one of its cornerstones; for large swathes of the population, the Communist party which had built its rhetoric on equal opportunities for all workers was striking a note across the land; anything which least resembled the Mussolini era was seen as a good thing, for most.

Cycling in this same period was set for a revolution. Before the war, one man had begun to represent a nation earnestly, winning nationally and becoming a treasured figure in the process. After the war a rivalry with an unorthodox compatriot would see Italy divided in sporting terms, and the power of the bike doing more to plaster over the cracks of a nation than any political action since.

Gino Bartali, the man who raced, respected and disliked the great Fausto Coppi was of humble stock. Born in Ponte a Ema, Florence, he was the third son of four, his family living in settling, as he would later in life in the Tuscan town. Aged 13 he began working in a bicycle shop where a career in amateur races soon followed. By 22 he was a Giro champion, aged 24 he was a Tour winner. In this short period, Bartali had cemented himself as Italy’s number one rider, be it the mountains or the flats, few races on the peninsula weren’t dominated by any other figure on two wheels.

Gino was “one half” of the Italian paradigm. Deeply religious, (his nickname was Gino ‘the pious’), conservative in attitude and a Christian Democrat; something which the Communist party would casually overlook due to his demeanour on and off the track. He was the opposite to his great rival in many ways, personality, looks even skill set, where Coppi was from the industrious ‘new face’ of the North, Bartali represented the traditional Italy.

It would be another ten years (WWII got in the way) until Bartali was to feature as predominantly in a grand tour. Togliatti’s shooting on July 14th 1948 would however set off a string of events that would send a racing icon of the time to be lauded as “the man who saved Italy”.

‘The Bartali Myth’ as it would be come to known begins with Alcide De Gasperi, President of the Republic and friend to Bartali making contact with the rider on the evening of July 14th. It is claimed that the President urged Bartali to win stages, even the tour if possible as this would calm tensions that were building in the homeland. A national strike was going to be called in protest to the violent act; a mini civil war (as it was perceived) could have broken at any minute.

Gino wouldn’t disappoint. The next three stages, all mountainous played to his advantage, he would claw back time lost and go on to eclipse his fellow riders. Bartali would win the tour that year, by an impressive twenty six minutes.

Bartali’s comeback and success that year apparently frayed the tempers of an ever increasing murmur of civil war. It was recorded at the time that people would be “too interested in listening to what was going on more than starting a war”.

As John Foot would highlight in Pedalare Pedalare, “In historical terms, there is no link between a failed revolution and a cycling race. But this myth is extremely powerful, and shows just how important cycling was in post-war Italy”.

Togliatti survived the attack, and Bartali would go on to be a road legend. His battles with Coppi would be made into books, TV dramas and even films. A two time Tour Winner and three time Giro champion, if Coppi was the Michael Jordan of cycling, then Bartali was surely the Magic Johnson.

Bartali’s home is not only a feature in this year World Championships (September 22 – 29) but it is the birthplace of “la Cucina Povera” (Poor man’s cuisine) which is now making a gastronomic renaissance across Italy. Typified by a philosophy of “making best of what you have” little to anything is spared.

La Cucina Povera is about embracing constraints and discovering the delicious creativity that can arise from making do with what you have in the kitchen. Tuscan cuisine such as panzanella, ribollita and trippa have all been championed more recently in these austere times.

Giorgio Locatelli takes on his version of panzanella which anyone can do at home, whilst Nigel Slater’s ribollita is something you need to try. And if you’re into your tripe, then David Rocco’s recipe is worthy for the most respected pallets.

Look out for the month of October. It is twin city month, Europe won’t know what’s hit it!