It’s nearly Christmas and Eatosi has been away for a few weeks. To get you all in the festive spirit, we are doing a Christmas culinary trip around Italia, discovering delicacies along the way. Today we’re in Piedmonte, a region responsible for Nutella and the Fiat 500! 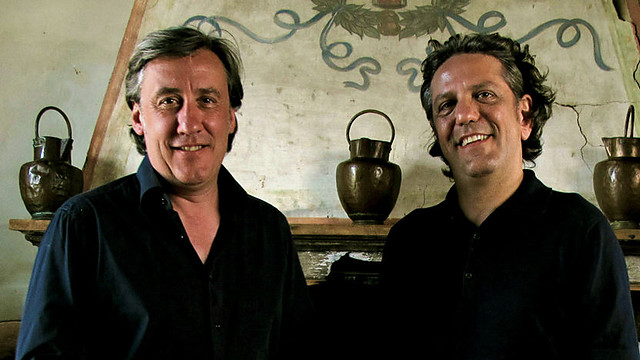 “This week we are in Piedmont, Italy’s best kept secret” enthused the celebrity chef; “where people’s deep connection with the land has created a very special blend of art, food and popular culture” uttered his wildly engaged journeying art historian companion. Giorgio Locatelli and Andrew Graham Dixon were on a mission, a journey to show you the non-tourist Italy, the “real Italy” moreover, the “regions that make Italy tick” as Locatelli would put it.

Truffle hunting, coffee culture, EatItaly, gianduja/chocolate, FIAT, rice markets, Barolo and champagne were all tackled in an hour’s homage to the northern region. Cultural debate was set aside, these two new age travellers sampling the best of wines, food, coffee and everything that Piedmont could offer; the things that most people think Italians do on a daily basis, of course they do.

But Piedmont’s culinary  excellence in the last ten years is something which has taken Italy and Italians by surprise. Whilst most Italian cooking is somewhat inspired by the “Mediterranean” ideology, a diet based richly on fresh fruit, fish and olive oil, Piedmont is entrenched with centuries of French, Austrian and even English culinary heritage. (The later probably has something to do with the bleak weather… )

Recently, Piedmonte has been proverbially handed the keys to gastronomy excellence with its new avant garde style and world inspired dishes, from chefs that had left the shores of Italia and returned to redesign cuisine. A mixture of Japanese and Vietnamese with those that Italy has rendered famous is the “new taste” of Piedmont, although the old taste is just as good.

With the white truffles of Alba to the risotto from Arborio, Piedmonte is Italy’s gastronomic playground. The vegetables in the winter are something to be had with it’s selection of amazing meats, and there are over sixty cheeses that are of Piedmontese origin.

The winter and moreover, Christmas favourite, il Bollito Misto is such a perfect example. Made from at least five different meats, it is a stew that takes on the best of piedmont, all in one pan. It was made famous by Vittorio Emmanuele II when he was the Prince of Savoy. Escaping the “mind numbing” royal duties and “fine, delicate, healthy” cuisine, he would be found in his favourite half way house enjoying the local working ladies and a bowl of Bollito with his friends.

To make this Piedmonte Christmas favourite, Antonio Carluccio takles il Bollito in this traditional recipe whilst Gordon Ramsay includes a strange selection of meats with his “easy” incarnation.